Portrait of the Artist Carle Vernet 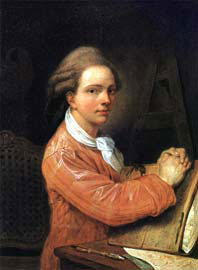 This recently rediscovered work had long been attributed to Jean Siméon Chardin. There are various old inscriptions and labels on the canvas and the frame referring to Chardin as the painter and to Joseph Vernet – the executor of Chardin’s estate - as the sitter. However, comparison with the famous portrait of his son Carle Vernet (1758-1836) by Nicolas-Bernard Lépicié in the Louvre (Inv.Nr. R.F. 671bis) confirms that Carle is the sitter. The monogram J.B.S.C. on the drawing folder held by the boy probably led to the mistaken attribution of the painting to Chardin. It seems that after his death, the latter was erroneously registered under the first name of Jean-Baptiste Siméon (instead of Jean Siméon). (see Florence Bruyant in: Exh. cat.: Chardin, Paris a.o.1999, p. 25, Archives nationales, M.C., LVI, 246)

We are very grateful to Helen Ashmore, Princeton, N.J., for the following entry:

Catherine Lusurier lived with and was trained by the two older painters of the Drouais family; her aunt, Marie Marguerite, was wife to Drouais senior. Whilst Drouais father and son tended to their royal patrons, she recorded likenesses of artists and intellectuals. Her best known portrait is in the Louvre: that of Germain-Jean Drouais, son of Drouais the younger, and a favourite student and colleague of Jacques Louis David. In the Carnavalet hangs her portrait of Jean le Rond D'Alembert who, as Permanent Secretary of the Académie Française, was among the most important intellectuals in France.

Of the six paintings recently proposed for attribution to Catherine Lusurier, the one presented here is by far the best candidate. When set along side the portraits of Germain-Jean Drouais and the Bremen Little Artist ( see Helen Ashmore, Catherine Lusurier, Apollo Magazine, London, May 2001.) it can be seen to be very close stylistically; the posture and gesture are similar as is the way the subject engages the viewer, an unusual attribute of petit ecolier paintings.

In the case of the Bremen portrait, the similarities increase: the palettes have neutral backgrounds set off by vivid colours of the clothes: rust with white fabric at the neck. The texture and draping of the white fabric of his scarf and her bodice are almost identical; the portfolios are very alike. But the most striking feature in common is the beautiful way in which the eyes are painted. This portrait does something none of the others do: it supports existing evidence that Lusurier once worked in Lépicié’s studio. A Lépicié self-portrait that passed through the Cuvillier Collection in 1932 shows an almost identical representation of a wig and jacket. Other similarities are too numerous to mention here.

This could be the second time in a short period that a painting has emerged as a Lusurier after having been wrongly attributed to a better-known artist. Evidence has shown that the Milwaukee Art Museum painting of a Little Girl with Flowers attributed to Drouais fils and signed with a signature he never used - is in fact the portrait of Charlotte DeBure by Lusurier shown in the Gazette des Beaux-Arts article by Sainte Beuve in 1927. (Unreleased manuscript by the author.)

At the time of Catherine Lusurier´s death at age 28, the Memoires Secrets noted: “The arts have had a true loss in the person of Mlle Luzurier . . . harvested in the flower of her youth and at the height of her studies.” The writer compares her work to that of three contemporaries: Rosalie Bocquet-Filleul, Anne Vallayer-Coster, and Elisabeth Vigée-Lebrun. Had she lived, he wrote, Catherine would have been leur emule, their rival.