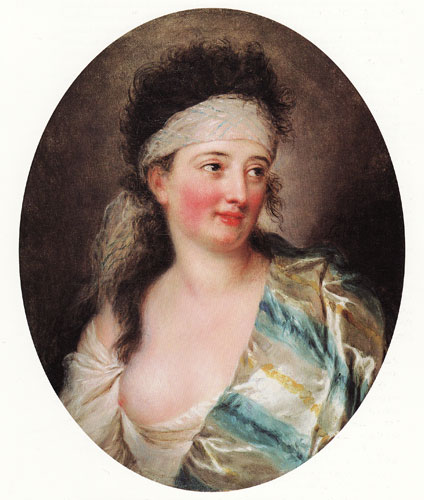 This work was painted during Therbusch-Lisiewska’s stay in Paris, generally regarded as her most important creative period. She had moved there in 1765 and had been elected a member of the Académie Française a year later. Lodging with the important art critic Denis Diderot, Therbusch-Lisiewska was introduced to the leading artists of the French Rococo. She was also in contact with the German group of artists around Johann Georg Wille.

The sitter is as yet unidentified; scholarly opinions on that subject differ. Originally the painting was thought to be a self-portrait, but this seems unlikely, given that the present model does not resemble any of the artist’s authenticated self-portraits. It is more plausible to assume that the careless young sitter belonged to the Parisian demi-monde, and was possibly a courtesan or even a common prostitute. Therbusch-Lisiewska was unable to afford the professional models used by the Académie or elsewhere in artists’ studios, and tended to work with people drawn from the street. A similarly lascivious, if smaller, painting by Therbusch-Lisiewska of a young woman wearing a négligé is in the Gemäldegalerie in Berlin, as is the artist’s oval portrait of Denis Diderot. (Gemäldegalerie Berlin, Gesamtverzeichnis der Gemälde, Berlin 1986, cat. no. 259-260, ill.).

The present picture demonstrates Therbusch-Lisiewska’s interest in the representation of a realistic, if very attractive, woman rather than that of an idealised figure of seduction. In this she differs markedly from most other painters of the Rococo. One of the leading female painters of the Rococo of Frederick II’s Prussia (see Baumgärtel), she contributed greatly to give that style its unmistakeable stamp. (see Edith Krull, Women in Art, London 1989, p. 40) (Bettina Baumgärtel, Zwischen Ideal und Wirklichkeit: Künstlerinnen der Goethe-Zeit zwischen 1750 und 1850, exh. cat. Gotha, Constance 1999, p. 310).