Portrait of a female Artist holding a Pen c.1842 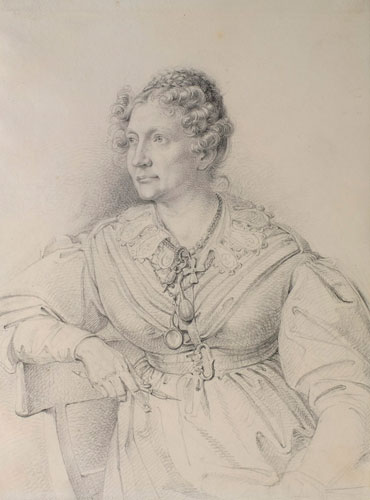 Maria Electrine grew up in an ambitious artistic household. Her father Johann Baptist Stuntz ran a drawing school and art shop in Strasburg. In 1808 the family moved to Munich, where Johann Baptist founded a lithographic press with Johann Nepomuk Strixner and Ferdinand Piloty. The publication of their Oeuvres Lithographiques – today considered the most important incunabula of reproductive lithography – founded the commercial success of the company and the reputation of the three lithographers. (1)

Inspired by her father’s example, Maria Electrine issued her ﬁrst lithographic work in 1810, and most important, Mes Leçons de Mythologie, between 1812–14. (2) In 1813, at the age of only sixteen, she became the second female pupil (after Marie Ellenrieder) to be admitted to the schools of the Academy in Munich. A glittering artistic career followed, which took her to Paris and in 1821 to Rome, where she became an honorary member of the Accademia and associated with the resident Nazarene artists. In 1823 the artist returned to Munich, where she married and remained until her death at the age of 49. ‘She made the most signiﬁcant contribution to lithography among female artists, while her exemplary oil paintings from the period after 1822 justify her to be ranked among the best artists of her period’. (3) Peter von Cornelius considered her even more important than Angelika Kauffmann.

The sitter is believed to be the artist Louise Braun, née Purgold (1782–1842), (4) who was a close friend of Freyberg from their early years at the academy in Munich. An impressive overview of the highly artistic skill of her drawings and oil paintings was recently shown in an exhibition in Fürstenfeldbruck, accompanied by a catalogue. (5)