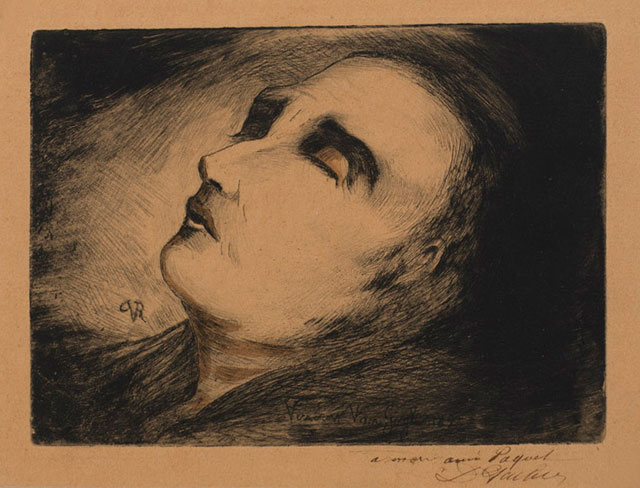 Very fine and early overworked proof impression in brown wash by the artist, who states it as the very first state of four (IFF). Perfectly sharp printing with areas of monotype effects. In perfect original condition, unpressed and uncleaned.

Of the greatest rarity, this print was published in a small edition. We know of only two other impressions of the final state coming up in the art market in the last 25 years.

On 16th May Van Gogh admitted himself to the hospital in Arles, seeking help from Dr. Gachet. On 27th July van Gogh shot himself in the head with a revolver. While still suffering from the emotional shock of Vincent Van Gogh’s suicide, Dr. Gachet appears to have done a quick charcoal sketch of the artist on his deathbed. There are two known versions of this drawing: one that was dedicated to Vincent’s brother Theo, who immediately showed it to his mother, (see Gachet’s annotation on our print), and is now at the Van Gogh Museum in Amsterdam and another one presented by Paul Gachet’s son to the French National Museums. (1) Our print derives from the first version, in the same year as Van Gogh’s death. In a letter to Theo on 27 th July Dr. Gachet wrote: “Dear Monsieur Van Gogh, It is with the utmost regret that I intrude on your privacy, however I regard it as my duty to write to you immediately, today, Sunday, at nine o’clock in the evening I was sent for by your brother Vincent, who wanted to see me at once. I went there and found him very ill. He has wounded himself...”. (2)

The pain Dr. Gachet felt at the death of his beloved friend and patient is very visible, not only in the image of Van Gogh on his deathbed but also, as Emile Bernard pointed out to Albert Aurier in a letter of 31 st July 1890: “Dr. Gachet […] wanted to say a few words of homage about Vincent and his life, but he too was weeping so much that he could only stammer a very confused farewell...”. (3)

As a collector Gachet would eventually amass more than one thousand prints and half that many paintings and drawings by both celebrated and unknown artists of the day. He also considered himself something of an artist. His house had a studio with a printing press and he became an enthusiastic engraver, partly as a consequence of his earlier contacts with Honoré Daumier and other contemporary printmakers, among them Charles Meryon, Rodolphe Bresdin, Charles Jacques and Félix Bracquemond. He signed his works “Paul van Ryssel”, using the Flemish name of Lille as a surname. In the summer of 1873 Paul Cézanne, Camille Pissarro and Jean-Baptiste Armand Guillaume all made prints in his studio. Gachet himself studied in 1872 and in September 1873 in the Paris studio of August Délatre, one of the foremost printers of the time.

Only a few weeks earlier on the 15th June, Van Gogh had produced an etching entitled The Portrait of Doctor Gachet: L’Homme a la Pipe, (4) little did Dr. Gachet know that he was to assume the role of artist in the very near future.

By producing an image of Van Gogh on his deathbed Dr. Gachet has provided us with the ultimate in intimate portraits of the artist. It is an intense portrayal, heightened by the fact that we can clearly see Van Gogh’s left-side where he sliced off his own ear. It is a portrait which, even in death, shows us the scars of a tortured genius, who produced some of the most remarkable works of the late nineteenth century.