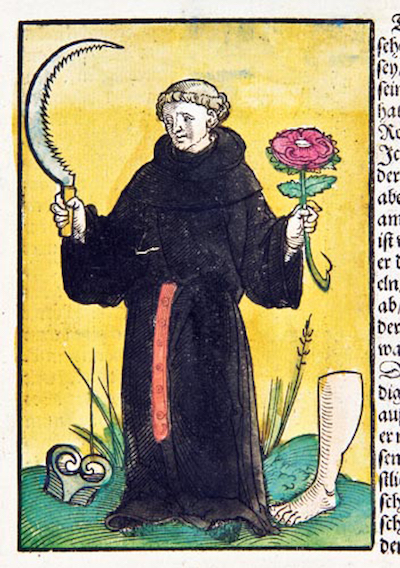 18 leaves (A-C4 D2 E4). Illustrated with 30 woodcuts by Erhard Schön, and cut by the Formschneider Hieronymus Andrea. Each woodcut is fully and elegantly coloured by a contemporary hand. 4to., 199 × 144 mm, bound in nineteenth- century English brown morocco, covers with gilt-tooled intersecting bands of repeated quatrefoil design within double borders; armorial supra-libros on front and cipher on back of John Eliot Hodgkin.

Extremely Rare First Edition.
Both graphically and textually incendiary, this work provided a beacon in the Protestant ‘war of words’ at the beginning phase of the Reformation. ‘It was an opening salvo in the anti-papal and anti-Catholic propaganda campaign waged by Nuremberg’s Lutherans’1 (Smith, p.167). Eyn wunderliche Weyssagung von dem Babstumb, wie es ihm biz an das endt der welt gehen sol (A Wonderful Prophecy of the Papacy about how things will go for it up until the end of the world) rep- resents a collaboration of several of the leading reformist figures in Nuremberg at the time; its publication was intended to provoke a sensation. And that it did.

Andreas Osiander (1498 – 1552), preeminent theologian of Nuremberg and radical Rector of the church of St. Lorenz, oversaw the production of a corrected edition of the Vulgate Bible, 1522, and played a leading role at the First Diet of Nuremberg, also in 1522. He was at the heart of religious fervor in Nuremberg, the first German city to adopt Lutheranism.