Prince with a Crown-like Fur Cap Seated on a Bench in Consultation with Four Knights. From Der Weisskunig 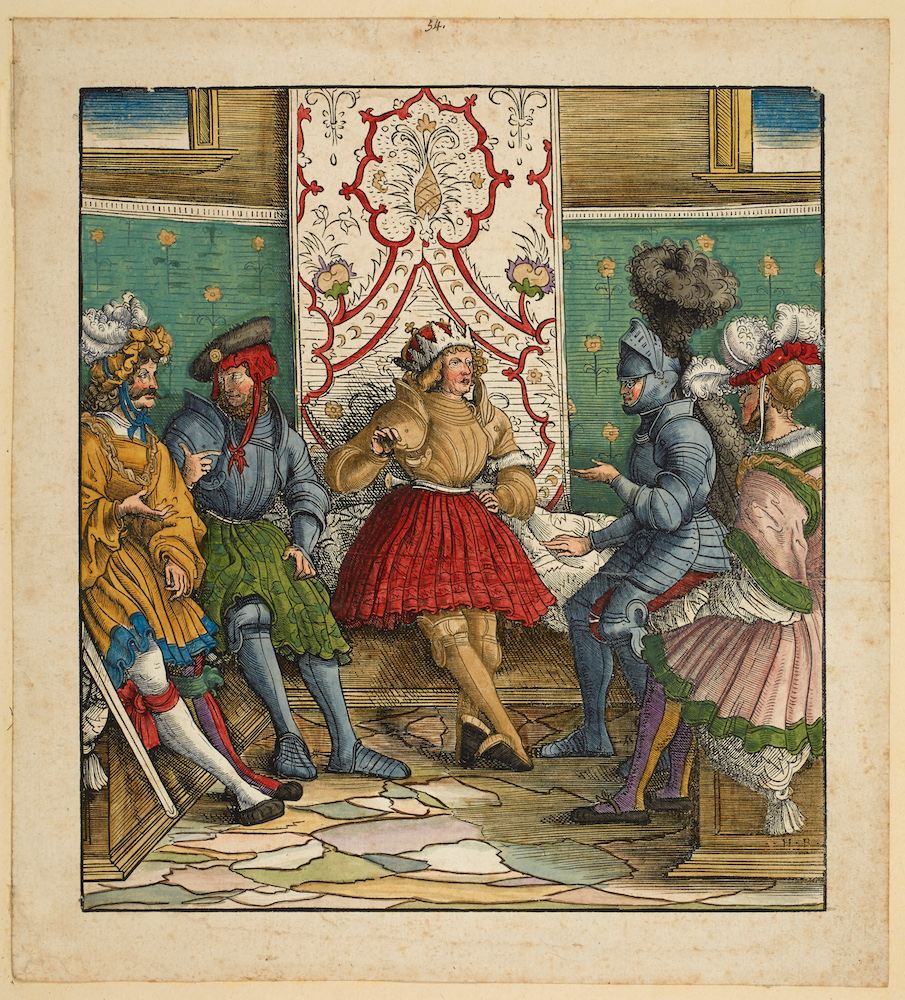 An illuminated early trial proof impression before the text verso for an illustration in Der Weisskunig. Before the cracks in the upper diagonal of the window beam in the upper right as well as the crack in a horizontal line of the windowsill in the left-hand corner. Our impression was undoubtedly printed before 1527 1 insofar as it features the watermark as desired for state III: Halberd (Meder 137/138) around 1520 (Briguet 7519/20), (Petermann, pl. 142). As Petermann points out, state IV shows considerable wear that suggests that the block spent 20–30 years dormant after state III was printed. In comparison, the quality of state III is much closer to earlier impressions of state II. A splendid print with unfaded colouring of the period, applied with transparent washes, without any use of a stencil matrix.

Our impression is one of those described by Petermann: …a number of the colour prints have been carefully applied with gouache and gold-leaf, probably from the period. Further impressions. decidedly belonging to the state III group of prints are at the Fürstlich Waldburg-Wolfeggsche Kupferstichkabinett at Schloss Wolfegg. It includes coloured impressions… (Petermann, p. 67). Burgkmair himself sometimes experimented with the colouring of his prints before going into edition. He would have coloured the earliest printing states as in the case of the Virgin and Child under a Round Arch, 1508 (Ashmolean Museum, Oxford) (see Dackerman. cat. no. 12). It may be assumed that he also had his prints coloured following his directions, if not supervised by himself, in order to generate additional financial value for his work. Der Weisskunig is a semi-autobiographical novel about Emperor Maximilian I, the selfstyled Last Knight. A rough draft, in parts written by Maximilian himself soon after 1506, was mostly written down by his privy secretary Marx Treitzsaurwein. 251 full-page woodcuts were ordered to illustrate the planned book, 118 by Burgkmair, the rest mostly by Leonard Beck, with a couple by Hans Schäufelein. The artists had to follow instructions sent from Vienna and some of the proofs were corrected by Maximilian personally. During production. only a few proof impressions and printer’s proofs were pulled. The edition was planned for the end of the 1520s; however, the first proper and fully printed edition was published by Abbé Hofstätter in Vienna in 1755. To this day, the valid and quoted edition is the 1888 edition by Alwin Schultz. Our image is printed on plate 155, p. 288.

In perfect condition with remarkably fresh colours. In this state, a marvel of German Late Renaissance printmaking. Such good condition is extremely rare.